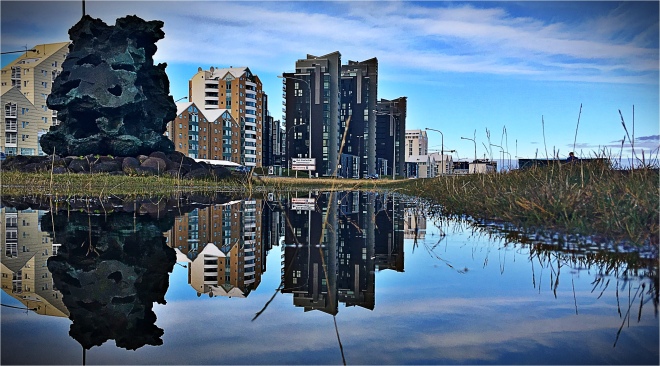 I don’t know whether to jump up in joy or cry in disbelief or both. In the Icelandic news, Jóhann Eyfells’ sculpture “Íslandsvarðan” has been officially acquired by the city of Reykjavik for a rather substantial sum of money, and is now to remain as a permanent installation on Faxaflói (Faxa Bay), on the northwest side of the capital city.

Why is this so important?

This is a huge victory for Jóhann Eyfells, an Icelandic sculptor, now almost 95, who has spent more than 70 years living in a semi self-imposed exile from his own childhood home and family.

With the expectation of helping with the family business upon his return, Jóhann at 23 was sent away to America by his mother to study Business Administration at U.C. Berkeley, California. Once there, everything changed. He would meet, Kristin, his eternal companion and wife of 56 years, and would eventually, contrary to ‘family expectations’ pursue a childhood passion for the creative process and find expression as a sculptor. For a short period, he would return to Iceland only to find himself misunderstood creatively and eclipsed by a younger generation of artists. America would become his permanent artist residence, both in Orlando, Florida and eventually Fredericksburg, Texas.

It’s a victory for artists all over the world, in which to create, to dedicate yourself entirely to the creative process does not always mean being spurned, tossed aside and forgotten.

It’s a huge victory for Iceland, welcoming one of it’s own, ushering back the clarity and fine instinct that artists like Jóhann possess and who are able to intuitively channel the ‘unknowing’ in their creative processes, and boldly execute in their artistic expressions and bodies of work. No less important is Jóhann’s uncanny ability to find diverse means, expressions and materials to articulate his ideas and vision. Furthermore, his work also embodies everything that is intrinsically Icelandic in nature, such as the ongoing fluidity of the physical forces, destructive and creative, that give form and understanding to the human experience.

It’s a victory for art, that a sculpture like “Íslandsvarðan” is recognized for its intrinsic and aesthetic significance, in a world where ‘value’ in art often seems arbitrary and is dependent on the piece’s commercial and monetary success, a commodity to be traded by only those who can afford to buy it, not to enjoy it for it’s genuine artistic expression and depth. Are we turning a corner in the 21st century, where art and creative expression could be considered a critical part of our own human survival?

Who am I to judge, I am just another human being that finds individuals like Jóhann to be inspirational, who also give me pause to reflect and reason to go on living, joyfully.

Hayden de M. Yates (Co-Producer and Director of A Force in Nature)

A Force in Nature, as of September 2018, will be seen in select theaters and venues throughout North America, Canada and the US.

For more details on future screenings and exhibitions email us at: filmmakershowcase@gmail.com or call (512) 966-9299.

I thought I would continue a discussion on the merits of art, but this time from the point of view of an art historian, critic and curator. Here is what Joseph Bravo wrote about an important art installation in the city of Reykjavik, Iceland, the Icelandic Cairn, “Íslandsvarðan” created by Jóhann Eyfells.

“During my recent trip to Iceland, I was glad to discover that the significance of Jóhann’s artistic achievements was appreciated by art historians and museum administrators in his homeland. While Johann may have spent a large portion of his creative life in the U.S., he has been and always will be an Icelandic artist. My recent trip to your beautiful country only further convinced me of the inextricable link between Iceland and the aesthetic optic of this extraordinary artist.

The Icelandic landscape, the national character and the cultural context of Eyfell’s artistic practice are all clearly evident in his body of work. While his ideas and aesthetics have been in dialogue with the wider international art canon, the orientation of Jóhann’s inquiry is fundamentally connected to Icelandic indigenous perspectives and the instincts he derives from the landscape. Hayden de M. Yates’ cinematic biopic, “A Force In Nature: Johann Eyfells“, that premiered last week at RIFF, is aptly titled because the artist’s practice has been conceived from its inception to function as a force indistinguishable from nature. For Jóhann, both his existence and artwork are themselves the result of natural phenomena.

Eyfell’s “Íslandsvarðan”, a sculpture currently on display in Reykjavik is of particular significance because it represents one of the most ambitious achievements in his bronze “Cairn” series. This series, perhaps as much if not more than any other in his deep oeuvre, bears the most literal testimony to the relationship between the artist’s aesthetic and the history of covalence between Icelanders and their physical environment. Jóhann Eyfell’s work has functioned on so many levels and touched on so many issues of art theory as to represent a heroic intellectual achievement spanning the scope of 20th century aesthetic priorities. In this important piece, he addresses conceptual issues of physics and metaphysics. The artist investigates organic form and environmentalism, chaos and hyper-complexity, superfluidity and spontaneity, the distinction between instinct and intuition, truth to materials and their iconographic implications, abstract expressionism vs. simulacrum as well as cosmopolitanism and indigenous cultural context. The artist’s expansive curiosity has allowed him to use his artistic practice as a mechanism of cosmological intellectual inquiry touching on an infinite number of theoretical facets. In “Íslandsvarðan”, he has achieved a masterwork of intellectual and aesthetic speculation. Eyfells has accomplished this without being derivative and while creating some of the most ground breaking sculptures in the history of Icelandic art in particular. His artwork is technically and conceptually innovative by any standard hence his intellectual contributions are of international significance to the wider global art canon.

The current site of “Íslandsvarðan” is in many ways ideal as it faces out over the Faxafói Bay and symbolically connects Reykjavik with Mt. Esja. The aperture at the sculpture’s center ensures that the vista of Esja is never obscured and makes for a respectful compliment to the awe inspiring landscape. Its position along both pedestrian and automotive thoroughfares as well as its visibility from the sea affords optimum appreciation of the sculpture by local residents and visitors alike. Its proximity to other important sculptures allows it to convey gravity in keeping with the curatorial context of public artworks in the vicinity and is essential in the creation of a consistent and poetic narrative along the shoreline. Even its placement on the rubble stone base lends elegance to its appropriate presentation. Those responsible for its original installation are to be commended on their foresight and good judgment in how this was technically managed.

It is my sincerest hope that “Íslandsvarðan” by Johann Eyfells becomes a permanent fixture in the civic landscape of Reykjavik. The citizens of the city and the nation of Iceland are indeed fortunate to have such an important artwork. It stands as yet another reason for well-deserved Icelandic cultural pride. Jóhann Eyfells is an Icelandic national treasure and one for which the rest of the world owes a debt of gratitude to Iceland for spawning and inspiring him to create such edifying artistic achievements.”   (Written by Joseph Bravo)